Formed in summer months of 1995, TEMPLE, a Doom/Black act, is considered one of the biggest and most respected extreme metal bands coming from Puerto Montt, Chile. This project was born shortly after the demise of VERBIMUS. In 1999 TEMPLE released an impressive EP titled The Crepuscular Circle Of Eternity where you can hear an interesting mix of Doom and Black stuff plus some contemporary Heavy Metal influences.

The line-up of this recording included Sekker (TEMPLE, EXCORIATE, FUNERAL CHANT, ex-METZERGENZEIN) on vocals, Julio Bórquez (ATOMIC AGGRESSOR, CAPILLA ARDIENTE, ex-AGANICE, ex-INSORCIST, etc.) on guitars, Mauricio Enipane (ex-VERBIMUS, ex-MENTAL ATROPHY, ex-DRAKHER) on drums and César Orellana on bass guitar. The EP was released on pro tape by Extreme Music in a limited edition of 250 copies. Is relevant to mention that The Crepuscular Circle Of Eternity is one of the first “professional” extreme metal recordings in Puerto Montt’s underground scene. 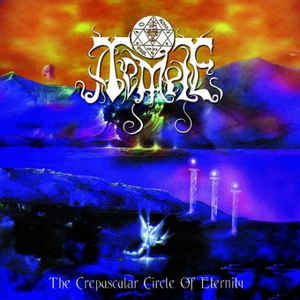 Shortly after the release of The Crepuscular…, the band lost three of the members that recorded the EP, remaining only Sekker, who started searching for new members to continue with TEMPLE. After trying different lines-up, the band put out a new demo tape titled just as Demo-Advance in 2003 including two tracks: a new version of ‘Nosferatu’s Passion’ and ‘Lady Ghost’. The new stuff sounds more oriented to the Doom and Black territories than the previous work, criticized because of its Heavy Metal influences.

Another demo was released on CD in 2005 including for the first time in TEMPLE’s history a song sung in Spanish language and a couple of cover tunes from Czech ROOT and German BETHLEHEM. It was titled Laudes Del Malfadado. Between 2008 and 2010 TEMPLE released 3 different productions: Mistress of the Timeless Shadows (single, 2008), Promo (demo, 2009) and Single + Promo Rehearsal (demo, 2010).

TEMPLE enters again to the studio to record a 3 way split CD with THE FALLEN and MISCHIEVOUS AUGURY. Issued on CD by the Chilean label From The Grave Productions, TEMPLE included 3 songs:  ‘Mistress of Timeless Shadows’, ‘Only A Flame In The Darkness’ and ‘Gilgamesh’. TEMPLE takes participation on another split release in 2015 titled A Funeral Chant in the Temple of Behead Christ, issued by Old Silver Productions. The other 2 bands were FUNERAL CHANT and BEHEAD CHRIST. TEMPLE contributed with the tracks ‘Introduction to Mourn’, ‘First Meeting’ and ‘Last Halt in the High Volcano’.

In 2016 The Crepuscular… was officially re-released for the very first time on vinyl format in a limited edition of 500 copies by Chile’s Melipulli Records. This version was remastered and contains one extra track: it is a sung version of the instrumental composition ‘Tears into the Nocturnal Haze’, the fourth track on the original tape version released by Extreme Music back in 1999. A new release was announced: a split CD including stuff from Brazil’s BLAZING CORPSE and TEMPLE, whose title would be The Blazing Temple.